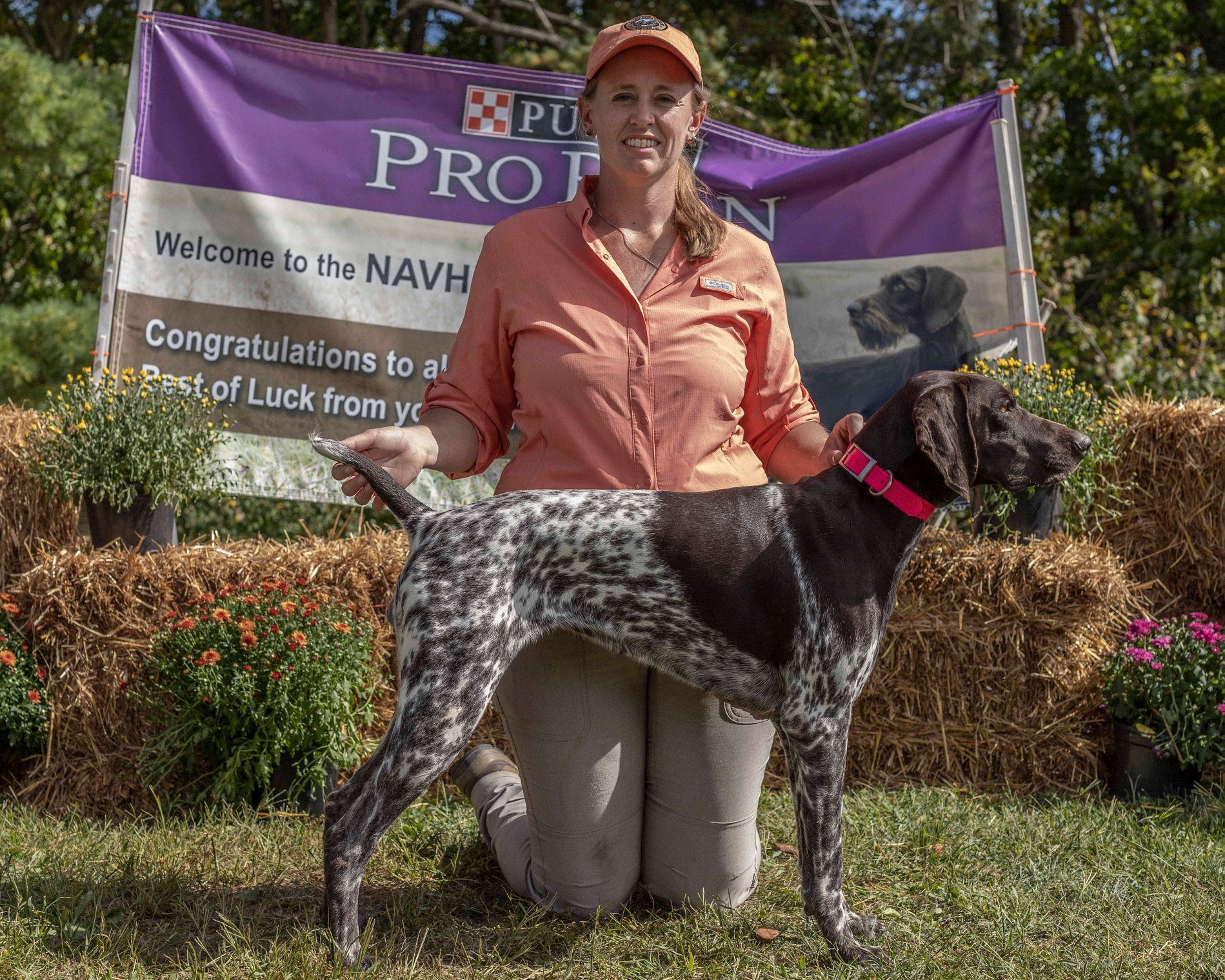 Life is made up of moments. “200 VC Pass” was one for the record books. A true dream-worthy moment, just as you would imagine: a pavilion filled with applause and cheer, hugs and pats on the back from people I’ve known for a long time and others I just met. It was a great moment, but it was just that: a moment. A moment that was preceded by 90 moments of spectacular honest work throughout that day. A moment that was the culmination of four-and-a-half years of moments, some incredibly important, others small and of little consequence. That build up, our journey, is the real story.

Everyone wants to hear about the moments that stop you in your tracks and leave you shaking your head thinking ‘Wow!’ The hard-hitting back, 60-yards out, not a blink of an eye after our brace mate goes on point. The cripple recovery that was handled flawlessly. 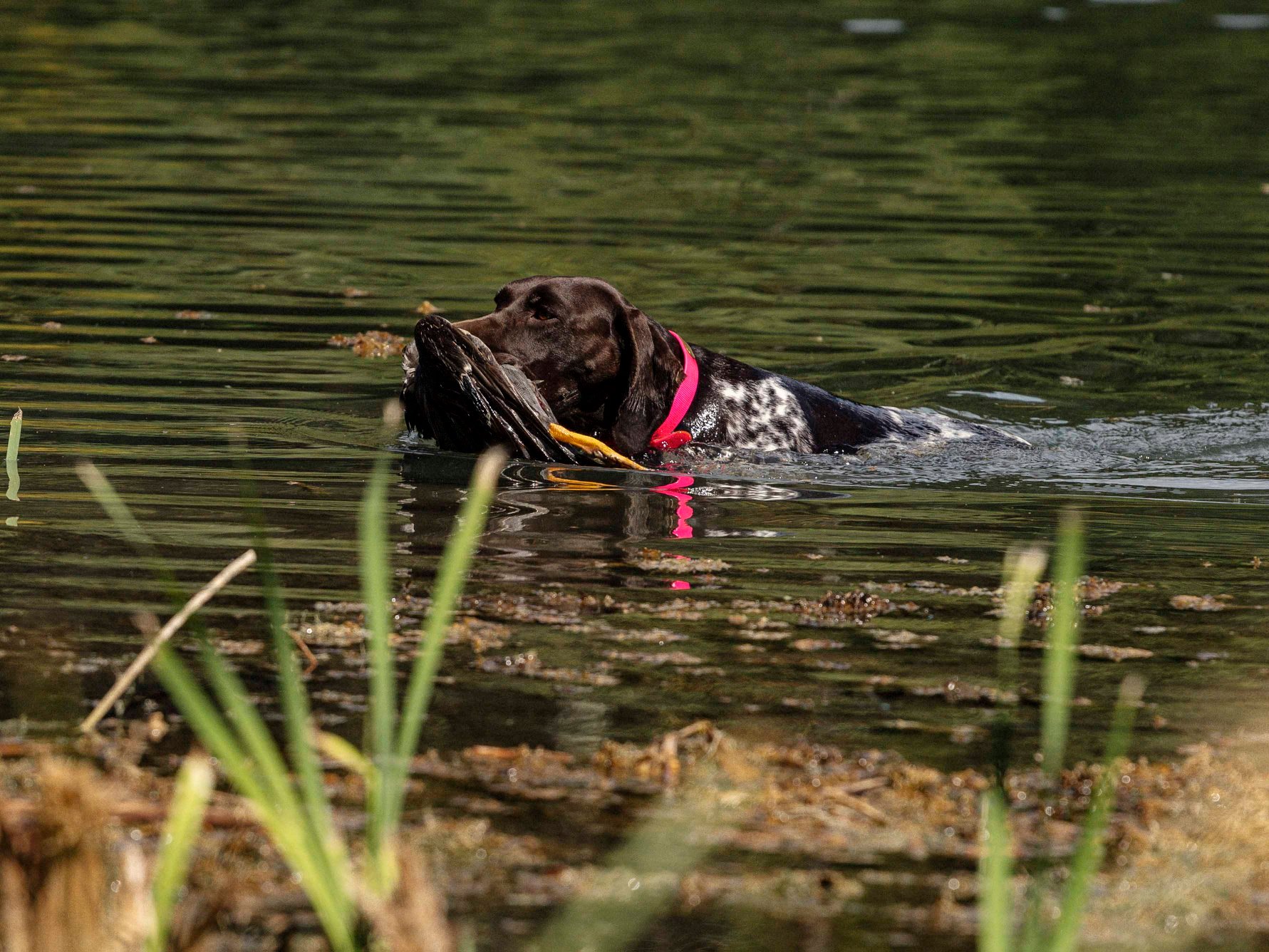 The water retrieve in which the unimaginable happens while scrambling over rocks to get to shore, and the duck’s head catches between a foot and the rocks underwater, but she somehow still retrieves to hand. A successful blind retrieve even when her handler sent her with the wrong command. Those moments will always be etched into Elsa’s story, but they aren’t our defining moments. The defining moments came with a little more dirt, a little more sweat and a lot more tears.

Our story isn’t a short one. Things didn’t just fall into place the first time out. I didn’t have a magical formula that got us to the end with a snap of my fingers. It sure would have been simpler and that’s what everyone wants to hear. Tales of “the secret”, “the touch”, the wowing highlight reel. Unfortunately, I am going to disappoint a lot of folks. Our secret was the work. Day in and day out. We laid our foundation, slow and steady, building on it day after day. There isn’t much glamour to the work done in the backyard or the living room after the kids go to bed. Moments where a little here and a little there eventually over time became a lot. They eventually became something special and a dog that is really fun to watch work. We couldn’t have achieved any of it without those ugly, dirty, and difficult moments.

There are so many moments I wish I could go back and have a do-over. The moments that “if I would have done things right, everything would have been so much easier.” Moments where Elsa was put on the back burner because life threw us for a loop. Those moments that resulted in her not receiving all of my attention for a span of time and a missed hunting season. Places where we had to grow and fight as a team and the goal that we were trying to accomplish looked so big and daunting. Now looking back, I wouldn’t change any of it for a single second. Those moments made her the incredible dog that she is. They made me the dog handler that I am. The fight to reach the finish line created one heck of a dog in the process.

Hunting was Jake’s hobby. He would go hunting, and I showed horses. I still remember the first training day we went to. I was the only female in the parking lot. We didn’t know much about good dog work at the time, and, within 5 minutes, we realized we knew even less than we thought we did. Nonetheless, we started walking fields. Late in the day, I watched in awe as someone who would become a dear mentor and friend work his dogs in the parking lot. 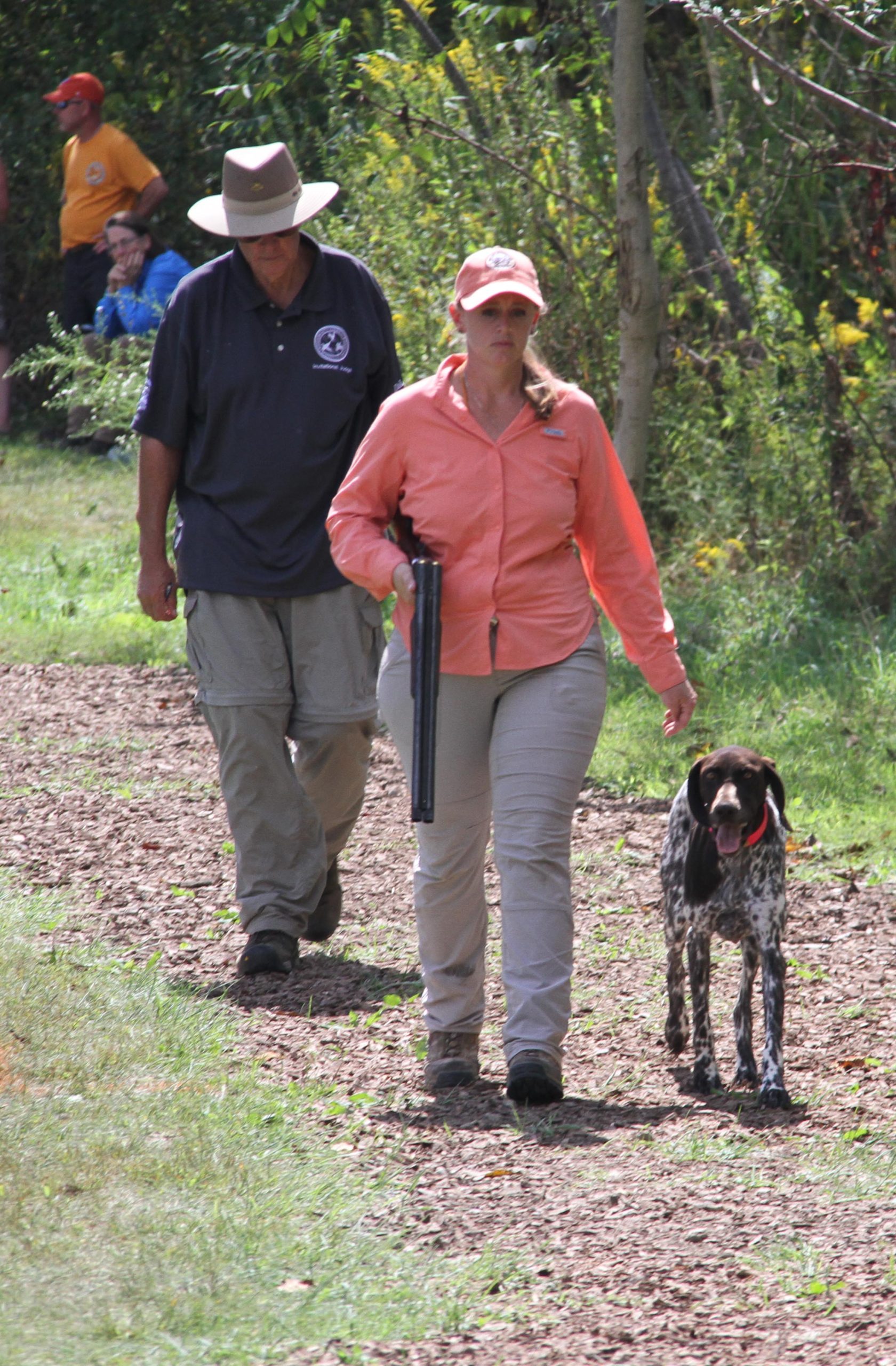 It was like watching Red Light, Green Light between a man and his two dogs. But that moment held so much more. The love, respect, and the willingness to be a team that exuded from the eyes of those two dogs was breathtaking. Not until much later did I know the titles and accolades those three had achieved.

We kept going to training days leaving our dog at home so we could focus on learning. We stayed all day. We walked fields. We watched and asked questions. Then another big moment came: sitting in the grass overlooking the steady at the blind, I met a woman who later introduced me to Elsa’s breeder. Little did I know that her dog would be one of Elsa’s grandparents. Little did I know the titles possessed or the bloodlines that made up that dog. All I saw was a handsome German Shorthaired Pointer sit calmly with his person soaking in the action that was unfolding before him. Every now and then, he was called to the water’s edge to make a retrieve. Then, without a word, he would come back and take root in the same place he held just moments before.

It was that day, that very moment, when I told Jake that I wanted a dog of my own. 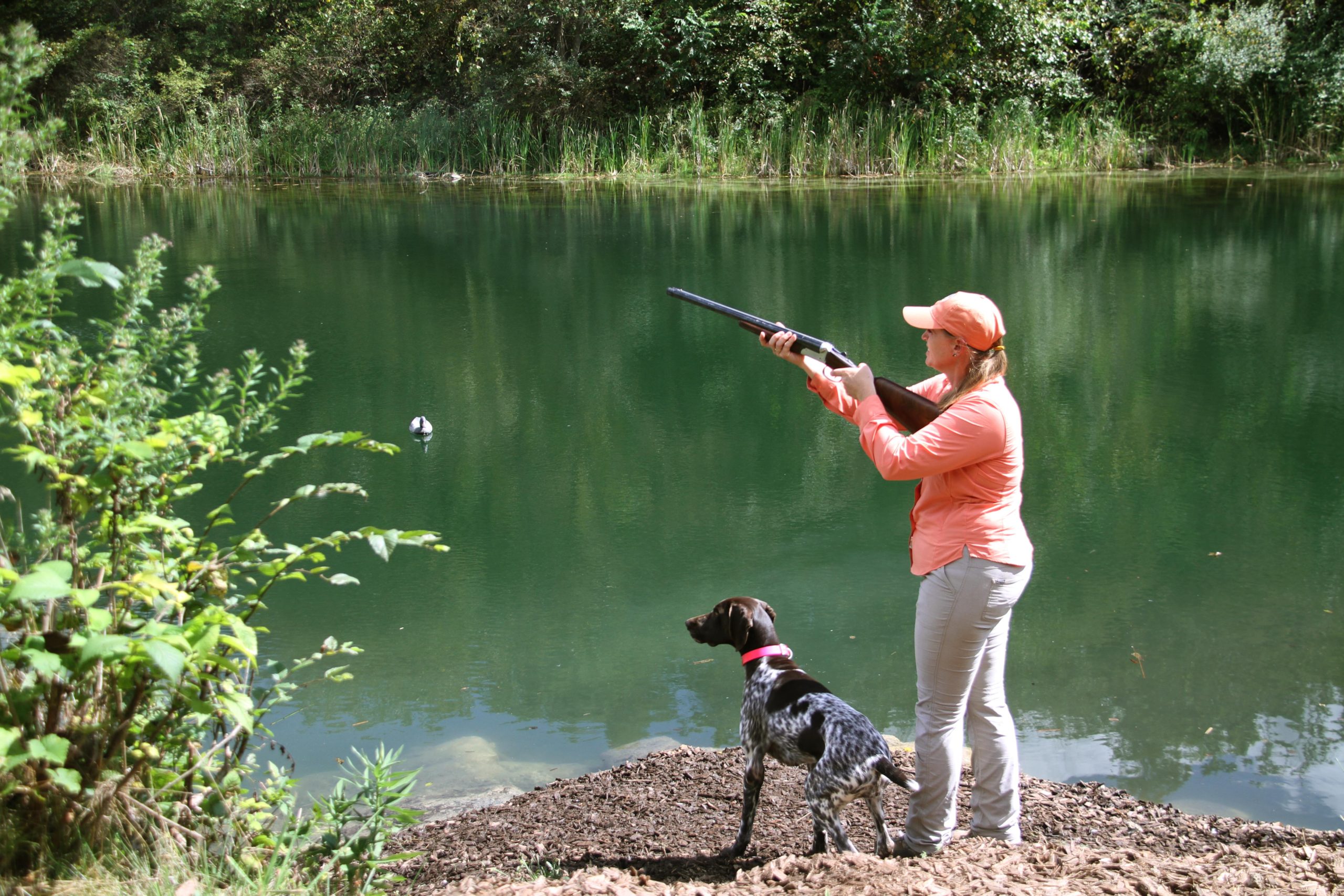 To join his excitement and his hobby. I hoped my ability to read horses would transfer to training dogs as well. I learned that body language, consistency, and voice are read by both species more than we realize or give them credit for. Everything is black and white…there is no gray. We create the gray. However, the difference between prey animal and predator brought forth a desire in me to more deeply understand how a dog thinks and reacts. The chemical and structural differences in the brain change the playing field. The types of motivations and a different type of progressional work was where my guidance took on a different role as a teammate.

When we first started NAVHDA with Elsa, I had a dream of owning a VC. I didn’t know what that vision meant. I didn’t have a training plan or progression. I didn’t know how our daily, weekly, and monthly work would look. All I knew was I had a well-bred dog that had the ability and the capacity to do all of the work. It was bred into her because of generations of handlers and dogs that had proven the work. I also knew that I tend to be slightly stubborn with a desire to excel at the highest possible level. I didn’t know what terms like “elite hunting dog” meant. My only plan was to not give up. To uphold my end of the bargain by motivating her to find success because of the obedience and cooperation that we built through daily teamwork. Time was going to pass, so we just kept working on things hoping we would accomplish something good. Looking back, the work ethic and honest attitude that was encouraged and instilled in all those small moments began to fit together and build the foundation; the framework of the elite hunter that has now taken shape in the form of a stylish liver dog.

When the work started, our defining moments started to take shape as well. Our first Natural Ability test didn’t end with my ideal score, but something special happened because of that moment. 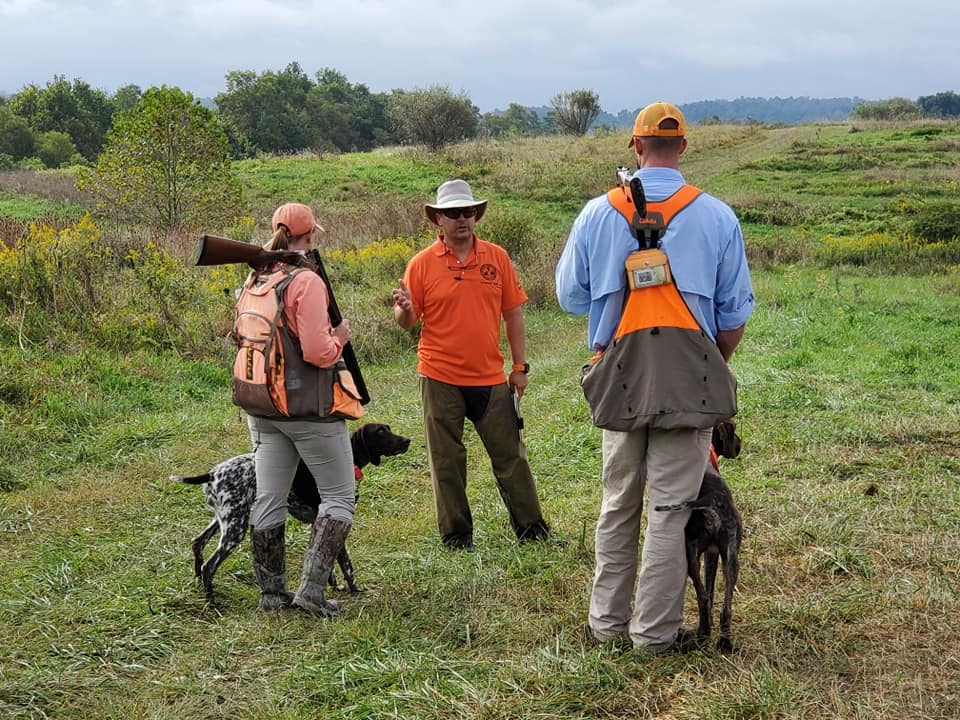 Three of my mentors shared with me their first NA test story: each dog had a hiccup that resulted in their less-than-desired result, yet every single one of those dogs went on to be a Versatile Champion. The impact was in the conclusion that followed each story: “I wouldn’t be the dog trainer I am today if it weren’t for that test going the way it did.” I understand now, on this side of the VC title, exactly what they meant. Every defeat was a lesson, and, trust me, we had some doozies, but we kept trying. Elsa kept giving me her all, and I kept taking her back out into the field. Every lesson, every failure, every step in the right direction taught us how to succeed the next time. A lot of hours were spent challenging Elsa and the rest of the team we train with to reach their full potential. We work together to make our handling skills better. It’s exciting to watch good dogs get better in small moments and see good teams walk one step forward towards their greatness. Because that is how our moments were created and other teams are finding their moments the same way.

I am eternally grateful for the people who shared their knowledge and experience with us. Mentors who saw my foundation work was solid and showed me how to match Elsa’s intensity to get the level of steadiness we desired. Mentors who exposed the missing piece in my Trained Retrieve yet knew they had given me the tools to fix my problem if I desired to put in the work. Mentors who wouldn’t give me the answers but would say in each of their own ways, “That’s a problem; you probably should fix that.” At other moments, sharing wisdom that only comes from putting in the work time and time again, like: “Your dog needs to have a little fun right now,” would leave me scratching my head. That advice I would come to understand later on. Judges who were bold enough to tell it to me straight. Things like: “You have an obedience problem, and you need to get that under control.” I’m thankful that they were genuinely willing to share an honest assessment of where I was in that moment yet gave me the freedom to find my path. They let me struggle but supported me through it. They let me grow and achieve knowing I needed the freedom to have moments of failure. I needed moments that came down to me and the dog searching for our own answer. One of the greatest moments of the Invitational was sharing that day with the 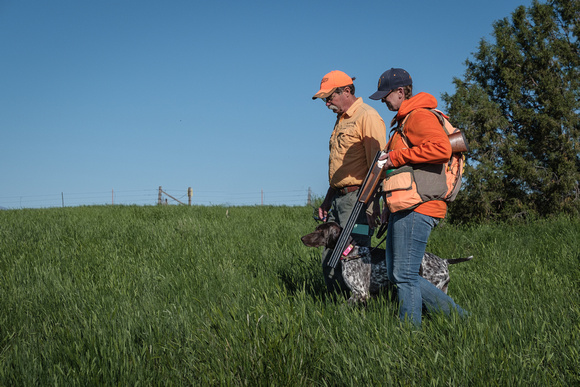 mentors who have walked with us over the last four years. We were so fortunate to have many of them either judging or volunteering in one component or another throughout the day. I hope they saw that I was always listening. I hope we made them proud.

Over the last four years, my understanding of the why’s have expanded beyond what I could have imagined. This incredible dog has created a fire and passion that I never anticipated. She took me beyond checking off a list of skills that I could ask my dog to accomplish in preparation for another test and another title. She showed me how to look for real moments in the hunting fields. Moments that put you on cloud nine. Moments that drive you to wake up before dawn to drive hundreds of miles so you can walk all day watching that dog put birds in front of your gun. Being able to watch a dog produce wild birds on public land, track and successfully recover any game that they are sent on and retrieve any bird regardless of the conditions because of the moments spent preparing and coaching. 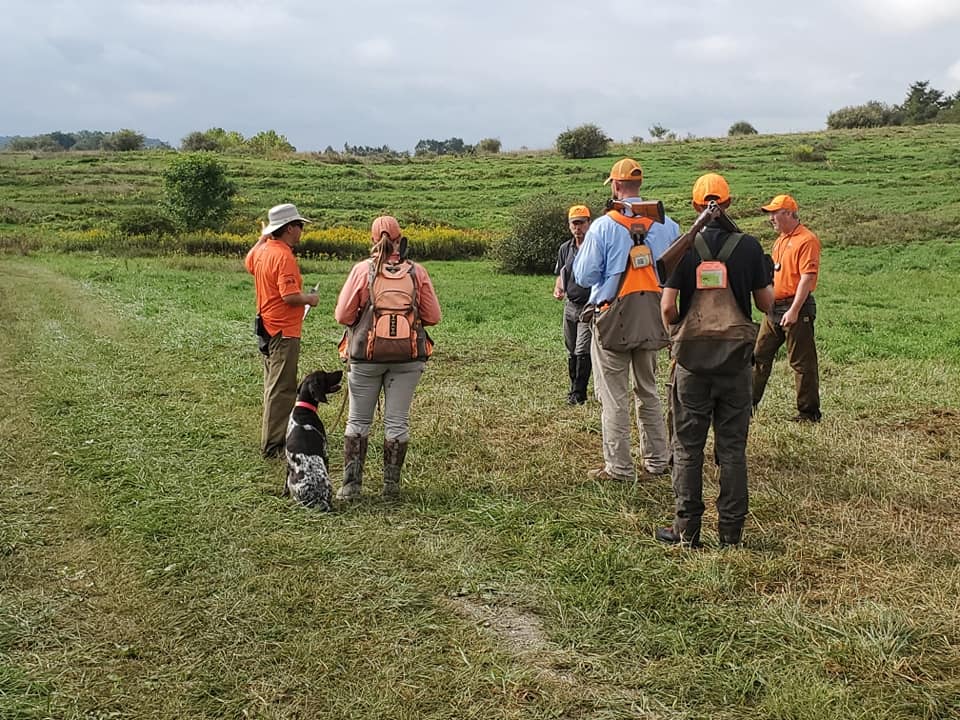 Every facet of the testing process has seen real moments in the hunting fields. Not one skill has been deemed unnecessary or unused. The honest, hardworking, focused approach that she hits the field with make every moment spent teaching and training worth it.

Elsa and I haven’t achieved all that I envision of an “elite hunting dog.” We still have work to do. There is still more I must learn and teach. More skills that I want to instill in her. She is too young, too talented, and too driven to be put on a shelf. There are still big goals to check off her list. I am so proud of how far we have come as a team, but the big key to the idea of an elite hunting dog is having the faith in knowing how far we can still go.